It has been such a rollercoaster since, probably Friday (which coincides with the day we ended our isolation). I'll do a day by day summary and follow up this post with a 'Neil's guide to buying property in Italy' post later, just in case you, after following our adventure, wanted to join us out here.
Thursday 29th July 2021
The end of our 5 day isolation was met with much joy. We went to the local pharmacia for our Covid tests. They were 'rapid antigen, nostril only' tests and I won't lie, it felt like they stuck that swab into my brain. I am not sure why it was so different, but compared to the test in Heathrow, this was a horrible experience (though still preferable to throat swabbing). Anyway, negative for both and a celebratory trip to Mercato (supermarket) to buy cheese and ham for the kids.

After lunch, we were met with confirmation that Monday or maybe Tuesday would be 'meet the notario (solicitor), agenzia (estate agent) and the sellers in a meeting to sign the contract. So cue the sudden motivation to transfer our money from the UK to Italy. Haha, so unorganised. Unsurprisingly, trying to transfer £25,000 at a time via online banking to Wise (formally transfer wise) resulted in Fraud blocking first our joint account, and then Sabi's personal. Cue the 'wait on hold forever saga'.
This was also the day my UK mobile contract ended, meaning we had very few ways (none that were free) to contact the UK bank to sort out the issues. Stress levels - medium - high
Friday 30th July 2021
We continued to be on hold for most of the day, meaning our ventures to visit the new house for the first time were delayed until mid afternoon, when the kids were hot, getting grumpy and tired (awesome timing!). Eventually we unblocked the joint account and started the transfer process, but Sabi continued to be blocked by the TSB fraud team. 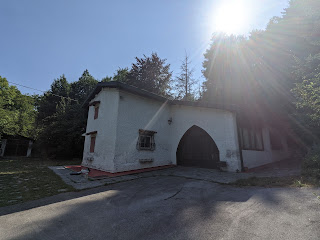 The house visit was lovely, the house was more beautiful than we'd hoped and so much more spacious than the pictures had shown. Some cautious optimism about the whole thing here as we finally saw (in person) the end of the journey.
Back to the temporary residence to be met with a phone call from the seller (or maybe the estate agent) to inform us that the sellers had got themselves a lawyer (unheard of in Italy - all legal stuff is handled by a single notario for both sides) and the lawyer was attempting to rip up the original contract (where we agreed a price, deposit and 'deadline' for completion - 31 december). This was down to the on-going 'garage with incorrect planning' issues that meant the deed for the house and garage were being separated and we'd buy the garage once it was fixed. Introduction of a lawyer and attempts to alter original contract were met with distrust and annoyance, Gino (Sabi's dad) immediately got in his little electric vehicle and drove to the estate agent to argue. I informed Sabi (and therefore her dad) we wouldn't be signing a new contract and the meeting with the notario was pushed back to Tuesday at 4pm. Stress levels - High
Saturday 31st July 2021
So everything is closed today and we didn't do a great deal, we discussed the sellers motive's for new contracts, i started browsing alternative properties should the worst case happen and we generally had a 'relaxed' day not doing a great deal, swimming maybe, maybe there were thunderstorms and the kids watched TV. I can't remember,

Lobo was collected by the taxi-man, several hours after originally planned, but collected safely and finally on his way to us.

9pm on Saturday I had a phone call from the taxi-driver at the UK border stressing because Lobo's passport didn't have my name on it, only the details for the rescue centre. Ooops. I emailed various documents (adoption contract, passport etc) and he was eventually allowed over. Hooray. 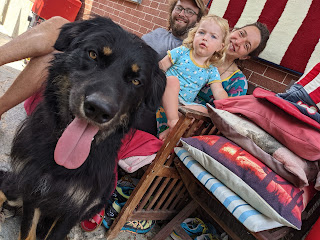 Rising early after being informed the taxi would arrive between 8 and 9, only to later discover that became 11:30, then 12:30. Still, he was on his way and we were excited to be reunited with Lobo.

Sabi drove us to collect Lobo from Cherasco, about 25 minutes from our temporary home. Lobo was excited, then went for a poo and to see some other dogs...not that excited. We were excited though. Happy times, we took him home, gave him cuddles and he quickly tried to investigate the 5 girls next door (one of whom is on heat). Happy Lobo. Stress levels medium
Nothing progressed on this day regarding the house, It was Sunday. Sabi managed to finally get through to the Fraud line at the bank, only to fail their tests (what year did you open your account? damned if we knew that). She had to send her details and passport to the team for verification then go through the whole damned process again. We did however succeed and open her account to allow transfers to go forward.
Monday 2nd August 2021 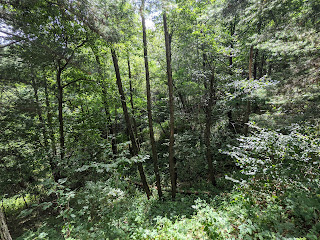 We visited the house again for a few hours to take some measurements, have a picnic in the garden and explore the woods a little bit. Absolutely lovely and delightful and we only found 2 ticks (one crawling on Sabi's clothes, and one that attached itself to Lucia - it was removed within an hour and stored safely - disease from ticks usually needs the tick to be attached for over 24 hours so nothing to worry about).
Tuesday 3rd August 2021
We didn't hear anything until about 15:15 regarding the meeting with the notario. We had previously been informed that the notario and sellers lawyer would be discussing the contract and changing to two new ones. So we sat about, waiting for any news. At 15:15 the estate agent phone, and had assumed we were still going, although we had informed them we'd wait for updates on the meeting.

Cue panic - Gino and Sabi went to the bank to withdraw the cheques with which to pay for the house (cheque payment feels very 'dark ages'), I got the kids ready for the excitement of a meeting (in which we'd hopefully buy the house) followed by Ice Cream to celebrate.
We arrived for the meeting at 16:05 and, after perhaps the most boring 3 hours of our lives (kids and me) we bought the house. For less money in the short term and obligations for certain things to be fixed by the seller by 31 December. Hazzah. It was now almost dinner time and the kids ate bits of their ice cream and two bowls of crisps from the local cafe bar.
Hooray. We are Italian home owners. Let the chaotic cleaning and fixing and moving in begin...
Here is Lobo and Leonardo happy in the car on the way back from the house after a day cleaning! 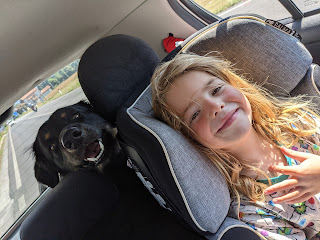