The last week has seen stress levels rise to never before seen heights in our household. From initially organised packing into last minute chaotic 'chuck it in any old box' packing and a moving day of 3 trucks arriving at different times, with only 1 of the 3 drivers speaking English and a lot of prioritising what was to be taken and what was to be left behind to a complete farce of an operation by Well Pharmacy. We have experienced highs and lows of moving house.
Thursday: the movers. 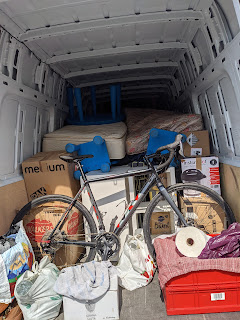 We used Shiply.com to get a range of quotes for the move and I quickly settled for the respondent entitled 'European Courier', they had excellent feedback and reviews, quick responses to my queries and a competitive price (neither cheapest nor most expensive). I happily booked 2 vans and paid the deposit (this changed to 3 vans as my early estimates were greatly under-sized and under-weighed).

Moving day finally arrived (Thursday 22nd) and having been informed the previous day that they would be with me between 9 and 11, I arrived at the house at 06:30 for finally packing and tidying activities. At 10:05, I received an email to inform me that actually, they wouldn't arrive until between 2 and 3. Balls and Buggery. My help (brother-in-law and father) arrived about 5 minutes after this email to help load the vans. Alas, I had to break the bad news, followed by the good news that actually, one of the vans (a Mercedes Sprinter) was only 30 minutes away and we could load 1.2tonnes of boxes onto it. Hooray.
The driver told us he could stay awake for 48 hours without problem and anticipated, with no customs issues, that he'd arrive Saturday morning (image above of his truck loaded to weight limit). Excellent. A few hours and much traffic later, the arrival of the next truck (and thereafter truck 3). Both larger and ready for the furniture. The barrier here, no English was spoken by the drivers and no Romanian was spoken by my crack-team. So we bumbled our way through loading the vans and, relatively quickly we ran out of space and I was left rapidly prioritising what to take and what to leave (farewell my oak bench and outdoor dining table).
With a signature and some random customs forms, we sent them on their way and finishing sorting out the house. Hazaah.
Friday: The flight 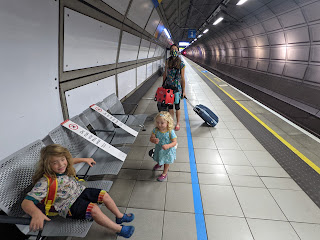 Friday morning I rushed around sorting out the final bits and pieces, sold the van and had a hurried lunch and an emotional farewell to my family and embarked upon our relatively uncomfortable taxi to Heathrow airport. The kids were well behaved, Lucia had a nap and we arrived without any issues or concerns. We approached check-in and let them know we were still awaiting our test results from the Pharmacy, they asked us to wait until they came through....tick tock, tick tock. I phoned Well Pharmacy, who were polite but unhelpful as they informed us that their pre-departure tests take 48 hours after the lab receives them to get a result...we took our tests 48 hours before our flights and they were collected Thursday morning at 09:30am, delivered to the lab on Friday morning (flight day) at 10am (don't know what they were doing in between). I asked how they can (miss) sell a pre-departure test so impressively they said it wasn't miss-sold and that their website has changed as they have changed test suppliers (which can apparently get a result the same day as it is received). We argued, Sabi got angry and emotional but in the end, we were out of time. We had missed our flight.

Cue a late evening in the airport trying to organise ourselves while our kids were (thankfully) being amazingly well behaved. We booked ourselves new tests at the airport for the following day (£70), found accommodation for the night (£100) and booked new flights for the next evening (£900). We then went on an adventure from Terminal 2 to Terminal 5 via the delightful (and free) Heathrow Express where we were greeted with London Airport cabbies who charged us £25 for a 4minute journey to a Covid-ripe maskless and social-distance-less hotel. Hooray. 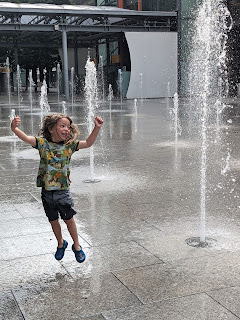 A fun night in the hotel where we all slept (mostly) to awake to the free breakfast (and stolen lunch), a cheaper taxi straight back to Terminal 2 for our rapid antigen tests and then back on the train to Terminal 5 to have lunch and play in the fountain (See photo). Then back on the train to Terminal 2 for check-in and boarding and finally, flying, landing and arriving home at 1am, a day later than planned and £1,000 worse off than planned. But arrived, safe, sound and ready for adventures.
I would like to add a massive amazing thank you to staff at Heathrow Airport who were relentlessly helpful, kind and friendly throughout our stressful couple of days. allowing us access to 'non-trolley' areas with our trolley to aid moving car seats around with us, helping us organise our tests and generally being kind and friendly to our kids, who were determined to make friends with every single one of them.

If you need to travel abroad and need to get a test. DO NOT USE Well Pharmacy. They are a bunch of thieving crooks. Also, you can book yourself in for a rapid antigen test at most airports if you arrive early enough without any real worries.
We all miss Lobo, who is staying with my parents in Swansea until he is collected next week and brought to us. I have no new pictures of him, and it makes me sad.
on July 25, 2021